Every screenwriter goes through the “waiting game” after you submit your script to someone for a read. It’s that horrible period when the lack of any reply can fester inside a screenwriter’s head and the fear of rejection and failure can fuel negative thoughts. We get enough rejection on our journey, so why create more anxiety for ourselves during the period when someone reads our script as we wait for them to get back to us, right? We have no control over when they will respond or even their response. Hopefully, we’ve done our best work in the script and what is on the page now it represents us without any excuses. It’s a process you will repeat over your entire career.

Many times I’ve learned that no news is just that—no news. I’ve conjured us horrible scenarios only to be proven wrong when the good news comes. As creative people, we screenwriters can imagine all kinds of unknown situations in our head, writing, filming and editing the outcome before it happens. That’s destructive thinking and wasted energy. The way to get through this period after you submit your script to an agent, manager, production company, executive or contest is to stay busy. It’s vital to your mental state over the long haul. Even when you do forge a career, you will submit projects to your producers or executives so it never ends. It’s how you treat the waiting period that counts and staying in control is vital to your mental survival.

You have to treat your screenplay as another opportunity for you to showcase your ability and creative voice to those who might hire you. Hollywood is a business of assignments where the bread and butter of working screenwriters comes from getting paid to write ideas for producers—not spec sales. A spec can open the door for you, but don’t look at every spec you write as a million dollar sale. It was my fifth spec that placed in the top 1% of the Nicholl Fellowship entries the year that I submitted it. It placed number twenty out of thousands of screenplays from around the world, but they picked the top eight to receive the fellowship.

That was okay, my high placement was enough to get agents, managers and producers to read my script and it eventually found a home with a new production company that wanted to produce the movie as their first film. That opened the door with them for assignment work and launched my career. I just finished my fourteenth assignment gig this week and my seventh produced film just premiered on LMN in mid September of this year. My eighth produced film will première on TV in November and it’s been a good run with two films produced in the last ten months.

It helps to always stay busy. While your script is out and you wait for a response, you need to create other projects, new loglines, pitches, treatments and work on a new screenplay. When you are busy, you won’t be obsessed with waiting for a response for those projects out in the marketplace. When the good or bad news trickles in, you won’t be destroyed by the comments or rejection because you will be too busy on your new screenplay. You open up new opportunities with every screenplay that you create. It’s vital to your creative soul to keep pressing forward and filling new blank pages.

And it helps to remember that Hollywood works on its own timetable. It’s a time warp where nothing happens as fast as you’d like and sometimes it feels like even a few steps forward takes too long. Time can burn so quickly as you pursue your screenwriting career in Hollywood. You spend so much time and energy finishing your script, once you finish how can you temper your excitement? This is what we live for as screenwriters—the excitement of completing a new project. It’s playing the game, living as a wide-eyed dreamer with hope for another chance up to the plate. It’s empowering to work on your own schedule and steer your own ship seemingly in control of your destiny. Now your script is the most important thing in the world to you—but you quickly discover it’s not to everyone else. This is when a time warp happens and your reality quickly shows down to Hollywood’s schedule. It’s a strange world of fear, unknowns, half-truths, promises, good intentions and a very long slog. Again, it helps to stay busy and working on your next great screenplay. 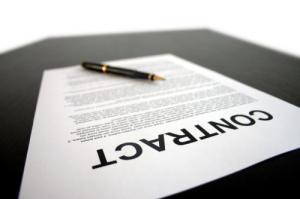 Even if you do land a screenplay assignment, the business side of negotiation takes time. One time my contract for a script assignment went back and forth between my lawyer and the production company’s lawyer for three months. As negotiations continue on every deal point, the back and forth seemingly takes forever—and this is before you can start any work on the script. Unfortunately a holiday comes up, so it means another four or five days until a reply and new draft of the contract. It seems like torture, feeling as if you’re in the starting blocks waiting for the starter gun to go off—but it never does until you and the producer sign the contract’s final draft.  This is when it helps to have patience my fellow screenwriters—learn patience.  It’s a big part of the life of a screenwriter and will help on your long haul journey.

The key to get through the “waiting game” is to empower yourself by staying busy writing. As you create a new project, the energy comes from your mind as you drive your dreams forward with your passion for storytelling. Don’t give into fear during the waiting game because that’s what it wants you to do. If you don’t hear back within your artificially created deadline, fear might creep into your creative soul and you will easily believe that you are a horrible writer if you don’t receive feedback. Avoid this destructive habit by staying busy during this period. You’re onto your next project and too busy to worry about what happens with the last. That’s empowering and puts you back in control.

Keep the faith and keep writing because if you stop, you’re guaranteed to never have any shot at success. And trust me this is a business where there are no guarantees—even when you sell a screenplay.

Did you just complete your latest screenplay? Is it time for in-depth consultation? Check out my services by clicking on the icon below for the link to my website.

Having trouble keeping focus on your screenwriting goals this year? Maybe my archived webinar can help, “A Screenwriter’s Checklist” now available for streaming rental.

“The professional understands delayed gratification.  He is the ant, not the grasshopper; the tortoise, not the hare… the professional arms himself with patience, not only to give the stars time to align in his career, but to keep himself from flaming out in each individual work. He knows that any job, whether it’s a novel or a kitchen remodel, takes twice as long as he thinks and costs twice as much. He accepts that.  He recognizes it as reality. He conserves his energy. He prepares his mind for the long haul. He sustains himself with the knowledge that if he can just keep the huskies mushing, sooner or later the sled will pull in to Nome.”—Steven Pressfield, The War of Art

“This is, if not a lifetime process, it’s awfully close to it. The writer broadens, becomes deeper, becomes more observant, becomes more tempered, becomes much wiser over a period time passing. It is not something that is injected into him by a needle. It is not something that comes on a wave of flashing, explosive light one night and say, ‘Huzzah! Eureka! I’ve got it!’ and then proceeds to write the great American novel in eleven days. It doesn’t work that way. It’s a long, tedious, tough, frustrating process, but never, ever be put aside by the fact that it’s hard.”—Rod Serling

“Starting tonight, every night in your life before you go to sleep, read at least one poem by anyone you choose. Poetry and motion pictures are twins. You’ll get more out of reading poetry than you will get out of any other kind of reading. You are people with eyes. You must find ways of extending this vision and putting it on film. As an experiment all of you could get out of here and shoot a cinematic haiku. Just go through a book of Japanese haiku and shoot a thirty-second film. They’re purely cinematic, very visual. You must read poems every night of your life in order to enable yourself to refresh your images. In forty years you’ll thank me for telling you this.”—Ray Bradbury, Conversations with The Great Moviemakers of Hollywood’s Golden Age at the American Film Institute.

Hemingway said it best, “I still believe, though, that it is very bad for a writer to talk about how he writes. He writes to be read by the eye and no explanations or dissertations should be necessary. You can be sure that there is much more there than will be read at any first reading and having made this it is not the writer’s province to explain it or to run guided tours through the more difficult country of his work.“

A raconteur of cinema. View all posts by Scriptcat