“MOTHER OF ALL LIES”

“Mother of All Lies” premiered on LMN (Lifetime Movie Network) and continues to be repeated. It’s also been distributed to Spain with the title “La decision de Sara” and in France with the title “Mensonges Maternels.  The film stars Francesca Eastwood (Clint Eastwood & Frances Fisher’s daughter) who recently starred in the TV series “Heroes Reborn” with my dear friend actor Greg Grunberg.

“I’ll Remember April“ opened the Palm Springs International Film Festival where it premiered to a packed audience of three-hundred people.  A question and answer followed the screening and I was included in the panel with the director and stars of the film.

The film was screened to raise money for several charities including “A Season of Non-Violence” and a screening at the Samuel Goldwyn Theater at the Academy in Beverly Hills for the “Vietnam Veterans of America” hosted by actor Troy Evans who played Chief Harrigan in “I’ll Remember April.” 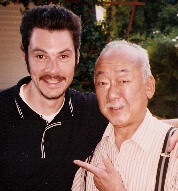 “I’ll Remember April” was the first time Mark Harmon and his wife Pam Dawber ever starred in a movie together.

According to actor Michael Cera during an interview on “The Tonight Show with Conan O’Brian,” as a child actor he auditioned for the part of Pee Wee Clayton in the film “I’ll  Remember April” but lost out to Haley Joel Osment.

“I’ll Remember April” star Mark Harmon‘s late father Tom Harmon enlisted as a pilot in the Army Air Corps on November 8, 1941. Mark told me that on February 23, 1942, Tom’s squadron was based in the central coast area and was scrambled to go after the Japanese submarine that shelled the oil refinery off from Golita, California.  The sub escaped and returned to Japan.  The attack was heralded as a great victory.

I based my movie on the submarine shelling incident.

Later in 1943, Tom Harmon parachuted into the South American Jungle when his plane flew into a tropical storm. None of the other crewmen bailed out or survived. He was the object of a massive regional search operation once his plane was reported missing. Four days later he stumbled into a clearing in Dutch Guiana. He transferred to single seat fighters. He was awarded the Purple Heart and the Silver Star for his actions with the 449th Fighter Squadron. These included having his plane shot down over Japanese occupied China. He saved his silk parachute and it was later used as the material for his wife’s wedding dress.

“I’ll Remember April” star Noriyuki “Pat” Morita was sent to the internment camps as a young boy.  He developed spinal tuberculosis at the age of two and spent the bulk of the next nine years in Northern California hospitals, including the Shriners Hospital in San Francisco. For long periods he was wrapped in a full body cast and told he would never walk.  After a surgeon fused four vertebrae in his spine, Pat finally learned to walk again at the age of eleven. By then his Japanese-American family had been sent to the Gila River internment camp in Arizona to be detained for the duration of World War II.  He was transported from the hospital directly to the camp to join them. It was there he met a Catholic priest from whom he would later take his stage name “Pat.”

“I’ll Remember April” child stars Trevor Morgan and Haley Joel Osment were both cast to do another movie together and once “April” wrapped they both went off to shoot a little film called “The Sixth Sense.” Nobody knew then just how massive a success the movie would become.

Haley Joel Osment and director Bob Clark had previously worked together in the film “Ransom of Red Chief” the film Haley did just before “I’ll Remember April.”

Pat Morita and Yuji Okumoto had previously worked together in “Karate Kid II.”

I first met Mark Harmon when I was a teenager and visited the set of the show “St. Elsewhere” a handful of times during one summer. Little did I know then he would later star in my first produced motion picture.

Director Bob Clark was nominated for the Starboy Award for “I’ll Remember April” at The Oulu International Children’s Film Festival in 2000.

The original title of the screenplay was “A Time for Innocence” and when the producers wanted a less “literary” title, I came up with “I’ll Remember April” based on the song from 1942 of the same name. It proved too costly to buy the rights to a version of the classic standard for the end titles, so the idea of using the song was scrubbed.

The screenplay bumped around Hollywood for nearly five years before it found a home with the producers. During its early journey, the script placed in the top 3% (a top 20 script) of all 3,514 entries worldwide in the Academy’s prestigious Nicholl Fellowship. It was my first spec screenplay sale.

The house interiors in the film were shot in one location, a Craftsman home owned by “I’ll Remember April” actor Troy Evans who played Chief Harrigan.

The train used in the film was privately owned and has appeared in numerous movies and television shows. It’s the Fillmore & Western Railway on 29 miles of the former SP Santa Paula Branch between Montalvo, Santa Paula, Fillmore and Piru, California.  The clubhouse interiors were filmed at Lacy Street Studios in East Los Angeles where a year earlier served as the same location for the bar interiors of my film “Stingers.”

Director Fred Olen Ray used over twenty live snakes during filming.  No snakes were venomous, but they could bite. “Silent Venom” was director Fred Olen Ray’s 107th film.  Fred had previously worked with me directing my script for Lifetime’s “An Accidental Christmas.”

The original working title of the film was “Recoil” and was changed to “Silent Venom” for the 20th Century Fox DVD release.  The SyFy Network then changed the title to “Sea Snakes” for its worldwide TV premieres.  The film has been distributed to seventeen countries with subtitled DVD’s and on television.

“Silent Venom” filmed on the same submarine set used in the 1996 Kelsey Grammer movie “Down Periscope.”

“USS POSEIDON: PHANTOM BELOW” aka “TIDES OF WAR”

“USS Poseidon: Phantom Below” was filmed entirely on location in Hawaii.  The film premiered at the Hawaii International Film Festival and opened the Rainbow Festival in Hawaii.   There were three versions of the film—the “straight version,” an alternate gay-themed version titled “Tides of War” that premiered on the HERE TV network, and a third version with more action specifically for a Japanese distributor.

The original title of the screenplay during production was “Tides of War.”  The title was changed for the U.S. DVD release to “USS Poseidon: Phantom Below” and in the U.K. to just “Phantom Below.”  The “Tides of War” title remained with the gay-themed version and premiered on the HERE! TV network in the United States.

Both versions of the film have received worldwide distribution including the U.K., Denmark, Germany, Hungary, Greece, Italy, Argentina, Canada, and Japan.

The Phantom Below – UK

I was lucky to score an acting role in the film as Lt. Roperto the Communications Officer on the submarine.  I named the character after my ex-writing partner.

Many of the character names in the script were taken directlyfrom my friends.  I had two scenes with star Adrian Paul who plays the submarine commander.

This was legendary Grindhouse director Brian Trenchard-Smith‘s 33rd feature film.   He has been credited by Quentin Tarantino as one of his favorite directors.  Brian’s first experience filming in Hawai’i was in 1971 as part of an Australian TV crew shooting a “Hawaii Five-0” promo with Jack Lord.

Director of Photography Paul Atkins also filmed storm and wave scenes for the Russel Crowe film “Master and Commander: The Far Side of the World.”

Art director Hayden Yates studied zoology at the University of Hawai’i before getting into production design and art direction.

During its premiere on Lifetime Newtork, “Deck the Halls“ garnered over 2.9 million viewers, one of the highest ratings of the season.  It has aired on Lifetime and worldwide every year since its premiere.

Director George Mendeluk has directed seven Academy Award nominees and two winners.  His nearly seventy credits include dozens of movies and hundreds of hours of TV.

“Deck the Halls” co-star Josh Hayden was nominated for the film as Best Performance in a TV Movie, Miniseries or Special, Supporting Young Actor at The Young Artist Awards, 2006.

“Deck the Halls” was filmed entirely on location a few hours outside of Vancouver, British Columbia, Canada.

The beach house location in “An Accidental Christmas” was on the Pacific Coast Highway in Santa Monica. This was the first film I’ve written that was filmed in my hometown of Santa Monica.

“An Accidental Christmas” co-star Austin Majors was nominated for the film as Best Performance in a TV Movie, Miniseries or Special, Leading Young Actor at  The Young Artist Awards, 2009

The film was originally titled “Skylark” and then “The Last Call” before it was changed to “Stingers” by Leo Films for the DVD release.

The film premiered at the St. Louis International Film Festival.

Seymour Cassel is a Best Supporting Actor Oscar nominee for his role as the hippie swinger Chet in the film “Faces” directed by John Cassavetes.

Cynda Williams starred in “One False Move” produced by Paul Colichman who was the same producer of my first movie “I’ll Remember April” and three others.